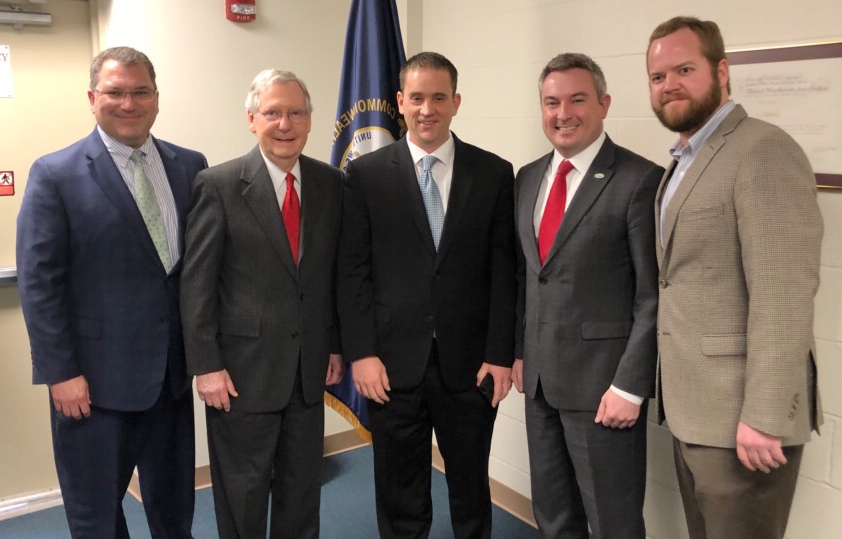 FRANKFORT – The U.S. Hemp Roundtable, the industry association that joins the nation’s leading hemp companies and all of its major grassroots organizations, today lauded U.S. Senate Majority Leader Mitch McConnell upon his announcement of the pending introduction of “The Hemp Farming Act of 2018.”  Leader McConnell’s bill, which is co-sponsored by U.S. Senators Ron Wyden (D-OR) and Rand Paul (R-KY), would permanently remove hemp from regulation as a controlled substance and treat it as an agricultural commodity.  Similar legislation, H.R. 3530, the “Industrial Hemp Farming Act of 2017,” was introduced last year by Rep. James Comer (R-KY), and has been co-sponsored by 43 of his colleagues, from both sides of the aisle.
“The hemp industry is very grateful to Leader McConnell for his strong leadership over the years on behalf of providing Kentucky farmers – and the whole U.S. agricultural commodity – this exciting new economic opportunity,” stated Roundtable President Brian Furnish, an 8th generation tobacco farmer from Cynthiana, who credits the Leader with empowering his transition from tobacco to hemp.  “Leader McConnell’s persistence and commitment has gotten us to this point – through his work on the 2014 Farm Bill and subsequent legislation that created today’s hemp pilot programs.  There’s no better person to help get us across the finish line.”
“While this has been, and will continue to be, a broadly bipartisan effort in Congress, when the history of hemp legalization is written, the two most important figures will be Mitch McConnell and James Comer,” stated Roundtable General Counsel Jonathan Miller, who previously served as Kentucky’s State Treasurer and Chair of the Kentucky Democratic Party. “Everyone who is working so hard to build this nascent industry understands that we owe deep appreciation to Senator McConnell for his strong commitment and steady leadership on this issue.”